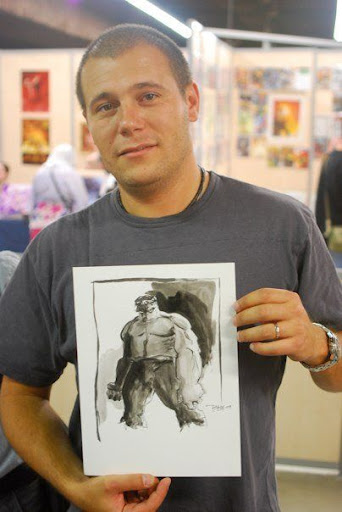 I’ve always been interested in reading American comic books and European “Bande Dessinée”. In the 70s and 80s, you could find stories about Spider-man, Superman and all kind of Superheroes in many different magazines, including the famous Strange which collected most of them. As any French kid, I have been reading many European comics (Tintin, Asterix, the Smurfs, etc…), but my own personal taste quickly got me more interested in American Comics. At the time, artists like Jack Kirby, Gene Colan, John Romita Sr and many others got me hooked…
In the mid-90s, the comic book industry got revolutionized by the appearance of new studios and publishing companies. Many artists left Marvel and DC comics, to create their own characters, and their own companies. That’s when the TopCow, Image, Wildstorm and Crossgen studios were born, and when characters like The Darkness, Spawn, Witchblade and Fathom appeared. This resulted in giving some fresh air to the industry, by improvements in the art itself, and the appearance of new drawing styles.
That’s when I started collecting original comic art, back in 2001. I randomly found my first page in a Parisian Art Gallery… and that’s when the collecting frenzy began. Then, with the growth of E-bay, you could easily have access to many original pages for sale. I quickly got in touch with many artists to directly buy pages from them. I also attended many conventions in the last five years: Paris, Barcelona, New York, San Diego, Long Beach, etc… I had a chance to meet the artists and get sketches or commissions from them. A big part of my collection is dedicated to “Superheroes in Paris”, made of drawings that I asked artists to draw specifically for me (what we call a “commission”).
Today, I own around 1.000 pages from a huge variety of American and European artists. My collection can be seen on a website I created in 2003 (http://www.jmb-art.com). Also, I’m part of an association, which organizes coming book conventions and signings in France – the WIP Agency (http://www.wip-agency.com). We also represent French comic artists in France and outside of France, and help them to sell their original artwork or commissioned work to fellow collectors.
My Collection started with one Superman page, bought in a Parisian art gallery, almost 10 years ago. I have first been focused around American artists only, but as tastes and passion evolved, I added many pieces from European artists as well, over the years. Today, my collection is made of about 1.000 original pages and covers. Hundreds of comic artists are represented, including the worldwide famous Jack Kirby, John Buscema, John Romita Jr, Gene Colan, Bob Layton, Adi Granov, Jim Lee, Dale Keown, Marc Silvestri, Michael Turner, J. Scott Campbell, Esad Ribić, Alex Maleev, David Finch, Travis Charest, Moebius, Paolo Serpieri, Manara…
Another part of the collection is made of sketches that I got from artists at various conventions worldwide. It’s mostly on smaller formats, and less detailed, as these are mostly quick drawings made in a few minutes (when an original page usually requires hours of work). The “Superheroes in Paris” theme is a unique part of my collection, as these are original pages that were specifically drawn by many artists, on request. I am very proud to own some pieces from my favorite artists, who were nice enough to spend some of their valuable time to draw something for me only.
Many originals will be on display, with a wide variety of styles, characters and artists. I hope you will all enjoy the show!

Jean-Marc Besnier was born in 1975. He lives in Paris, France.