Home » Re: Victor Drujiniu: Through the Eyes of the Predators

Acasă › Discuții › Diverse › FITI IN CARTI! › Re: Victor Drujiniu: Through the Eyes of the Predators

Victor Drujiniu: Through the Eyes of the Predators

Charles Webb: How did you come to this project?

Victor Drujiniu: I have come to be involved in this project through my agent, Shon C. Bury, who was on the lookout for the next project for me. Exactly in this period, Shon presented me and my portfolio to Dark Horse and the editors there thought I should give it a try. And I did. Then followed several months of tryouts coming from many different artists and agencies for this project. In the end, I was the personal choice of the film’s producer, Robert Rodriguez and of the owner of Dark Horse, Mike Richardson.

Webb: The franchise has kind of laid low over the last few years. What are you doing to keep it fresh for new and returning fans of the Predator brand?

Drujiniu: I tried a realistic take of the character, trying to stick as close as possible to the photo references that I had received. Nonetheless, I added new fantasy like elements and I explored many angles, “positioning my cameras” in all kind of different angles, the ones which are not likely to be seen in the film. In the film, you are bound to a camera, but here I can play freely with it and this is what a comic book artist can exploit.

Webb: What do you think is behind the appeal of the Predator mythos?

Drujiniu: In my opinion, when it first appeared, in the first film, the Predator creature was something totally new to the public eye. It was the ultimate killing machine, very intelligent and unstoppable. Not to mention its look: absolutely fierce and frightening. It’s no wonder that later on filmmakers put it against the Aliens…the two creatures that captured the public imagination at such a scale. And this Predator mythos is enduring because it was brilliantly created from the beginning. I mean the design was, and still is, mind-blowing. Just like the Aliens.

Webb: Can you talk about how the series might be adding to the mythos?

Drujiniu: I think this will definitely help keep fans’ attention at the upper limit. And I consider this series to be a very good undertone, as you cannot let the fans depend on just the films, and we know it is hard to make a film per year. So we need something extra. Otherwise, we have the danger of the legend fading…

Webb: Visually, what kind of feel are you going for with the story? Both the first two films had a sense of constant exposure for the leads — everywhere was a potential kill zone for the leads.

Drujiniu: Well, I drew according to the script. And the story in this script is exactly like in the first two films that you mention. The tension is high all the time, almost palpable; the new leads are constantly running, that’s for sure, especially after they realize that they are “guests” on an alien planet. And yes, danger is lurking absolutely everywhere, behind every tree, around every corner. So, following this kind of story visually, I believe I managed to render and express the exact elements mentioned above. I tried to capture as much tension and motion possible.

Webb: What level of coordination or collaboration did you have with the filmmakers? Were they willing to share many of the new character designs?

Drujiniu: I did not personally have contact with the filmmakers, but they were pretty open and collaborative through the editors. We actually had numerous references for each character of the film, starting with the actors and including the Predator’s designs and also setup/locations descriptions.

Webb: What do you feel your particular style brought to the story?

Drujiniu: Freshness. The kind of freshness that can be imprinted to one already famous character, such as the Predator. The particularity of my drawing style is my extreme attention to details; I like to capture as many definite details as possible. So I inevitably applied this to the new story, starting with the creature itself, including the actors, the decors, the landscapes, basically everything. I also tried to give the Predator a maximum realistic look, as if one might actually think this creature exists somewhere…

Webb: Now, the readers may or may not get to see much of these designs given that the Predators tend to remain invisible. How do you go about maintaining tension/interest in characters that the readers might not get too see too often? 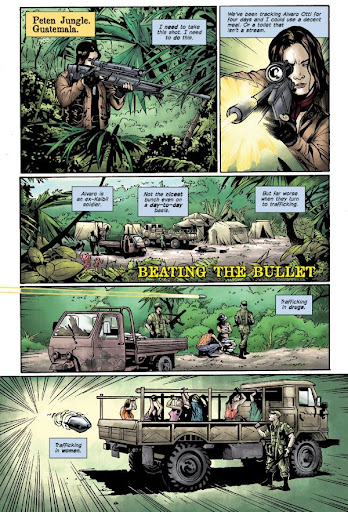 Drujiniu: Again, I am following the script, in which the Predators leave their marks, even if they do not appear. Or we have situations where their presence is just suggested, by settings, by the nature itself or by their objects. And of course, the situation where the Predators are draw just lightly, like a hand, a part of the head, a part of their body, among the jungle leaves, one of their weapons and such… So they are there, they are present and the readers do not actually lose track of them during the story. The threat they pose to human life is present all the time, so it is impossible to forget about them. http://www.comicsbulletin.com/features/127961518742560.htm